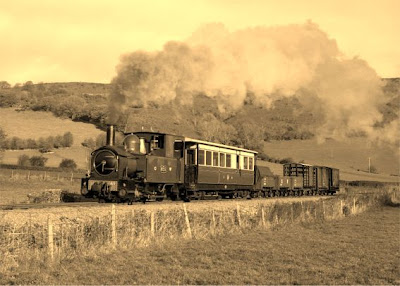 Well. Got a super keen mix for all y'all today.

We're off for a swell vacation this weekend, and through next week. You won't even notice we're gone, I 'spect. Off to the great city of Lincoln, Nebraska for valuable in-law time.

And we're takin' the train to get there. The venerable and vulnerable Amtrak, no less, due to Mrs. Mountain's aversion to modes of transportation more airborne. That's ok, though, cuz we think trains are real swell.

There's a romance to trains that is disappearing from the American landscape (in Europe, we're told, the train is still a viable and useful means of transportation). In many ways, the train is our last connection to the "go west young man" mentality, the covered wagon having gone the way of, well, the covered wagon. American folklore is filled with the mythology of the train, its conductors and engineers, the hobos, and the railyard bulls who chased them. When I think of trains I think of Charlie Chaplin in The Great Train Robbery. I think of Cary Grant and Eva Marie Saint in North By Northwest. James T. West and Artemus Gordon in The Wild Wild West. Boxcar Willie and Harry McClintock. "Midnight Special" and "Mystery Train". The whistle and distant clack, approaching then fading.

The train song holds a special place in the Big Rock Candy Mountain pantheon (just under the Truckin' Song, naturally).

Please, then, enjoy the following train mix, made especially...for you. See ya in a week or so.

As always, mp3 of the mix follows the track listing.

Please support your local hobo.
Posted by Brian K Reese at 8:00 AM

This is an absolute beauty! As good as it gets! Thanks.

Damn. Fantastic mix, sir. And enjoy Lincoln and environs; I keep a few relatives stashed there myself. Sorry about the godawful hour that train's gonna make it into downtown...

Really a wonderful mix. (Long time lurker, first time poster here...) Thanks for putting so much thought into your posts and mixes!

This blog reminds me of a now defunct restaurant/venue in San Francisco (Radio Valencia); one of the owners made mixes of Americana, Kitch, and whatnot that were really quite fun.

Anyways, I thought of Bigrock... recently when i saw these guys in philly: http://www.myspace.com/thehumblefishermen

I was wondering if you know anything about them.

The main thing, though, is these are the guys who supposedly Howie Day had to get a restraining order on because they were harassing, prank calling, and heckling him like non-stop as a joke. Goofy geniuses, I guess.

Has this mix been taken down? The link doesn't seem to work. Cheers.