Let Your Light Shine On Me 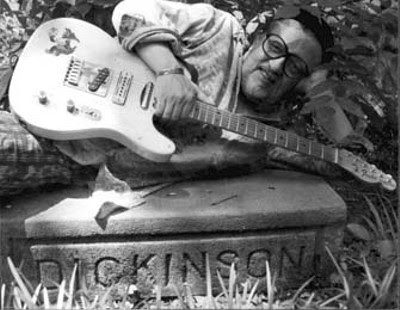 Very sad news. Jim Dickinson died this past weekend. He was 68.

What does this mean, exactly, and why should you care?

Well, first off, and most generically, he was the producer for two classic records that all y'all probably own and worship...Third/Sister Lovers by Big Star and Pleased To Meet Me by the Replacements. That alone should make you sit up and take notice, but there's more, so much more, to Mr. Dickinson's career.

As a producer he was behind the boards for such artists as Mudhoney, the recently deceased Willy DeVille, Green on Red, Mojo Nixon, The Replacements, Tav Falco's Panther Burns, Screamin' Jay Hawkins, T Model Ford, and Lucero, amongst many, many others. As a performer, primarily piano, he featured on such records as the Rolling Stone's "Wild Horses" and Bob Dylan's "Time Out of Mind". He played with Ry Cooder and The Flamin' Groovies. The list goes on and on...

As a performer, Dickinson released a slew of solo albums under his own name and as a member ofMud Boy and the Neutrons, and collaborated with Spectrum on a brilliant Southern Drone record entitled Spectrum Meets Captain Memphis.

Oh, and he has a couple sons, Luther and Cody, who are in a little band called North Mississippi Allstars. You might have heard of 'em...

We're only scratching the surface here, and a google search will give you so much more of Dickinson's contributions to the rocking and rolling.

We never met Mr. Dickinson, never spoke with him or asked him stories about his life and career. We're only left with speculation about a man with whom the heart of Memphis and Southern Soul seemed deeply ingrained. What he brought to his production, to our ears, was a sense of Rock and Soul as a way of life, an innate feel for the rhythms and sounds of the world outside his window, the stuff of life winnowed into a three-minute amalgam of guitar, bass, drums, and a voice crying mercy, mercy me.

We could probably have been hipper and more obscure in our music selection today. But why? Search out Mr. Dickinson, and you'll be rewarded. Today we've got a couple of our favorite songs from his two most "famous" productions. We've got our favorite Mud Boy and Neutrons song, and we've got a track from his aforementioned Spectrum collaboration. Seems, unintentionally, these tunes work to create a farewell of sorts. How about that.

Mud Boy and the Neutrons: Let Your Light Shine On Me (mp3)

Please support your local, independent records stores. Just seems to be the right thing to do. I dunno.
Posted by Brian K Reese at 8:24 AM

Thanks for this, it's great to find such heartfelt tributes to Jim's life and music everywhere on the net. He was a hero to me ever since I read Robert Gordon's epic It Came from Memphis, my love of that book took me all the way from Ireland to Mississippi for a memorable afternoon in the Zebra Ranch, where I heard some of Jim's remarkable stories about the likes of Ry Cooder, Bob Dylan, Paul Westerberg and Alex Chilton (as well as many about people less widely known, but crucial in some world-historical sense, such as Good Kid Robert). I count myself privileged to have spent time in his company and I can't believe he's gone. But no - as his self-penned epitaph will read, "I'm just dead, I'm not gone". As long as music lasts, he will be remembered by the people who love such things.