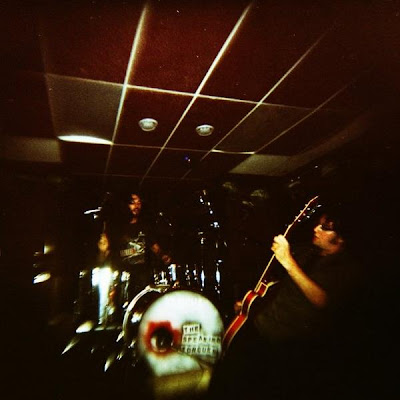 Hey, hey, my my. We're back to Deep Blues Friday, so let's not fuck around and get right to it.

A mighty ruckus then, of gin-soaked blues, sweaty and swaggering, burned-out boogie, grinding and ass-swivelin' rhythm. Mighty like a mountain, born in the soil. It's big, man.

The Speaking Tongues were swell enough to answer a few questions for us. Enjoy!


The BRCM Interview With The Speaking Tongues


The Speaking Tongues: Aaron and Pete from Toronto. We’re pretty sure a series of terrible mistakes brought us together.

ST: The name is all about how we play. Turning it up and just letting it roll. Give in to the boogie!

BRCM: What is your muse? Where does your mighty rumble come from?

ST: We get inspired by all sorts of music, from pre-war blues, to the revival era in the 60s, to modern stuff. Mostly, digging through record crates and researching through the history of rock and roll. It’s also just trying to be connected to something that a lot of people seem to thing is gone. The spirit of rock and roll, I guess you’d call it.

ST: My preference is for the shake.

BRCM: Like many of the bands we've been covering associated the Deep Blues movement (whatever that is), you're a duo. What is your take on that phenomenon? Do you find yourselves freed or limited by the set-up? What is your writing process?

ST: We started out just writing songs together because we didn’t know anyone else who liked the same stuff as us. So when the ball started rolling on the band thing it was just the two of us. It’s the only way we know how to write and play really. People ask us if they can play bass with us all the time, but adding another person just seems so wrong. Plus we make enough noise as it is.

As for writing it’s different every time. Sometimes Aaron will have a riff and some lyrics. Sometimes we’ll go off on a 20 minute jam and find a tiny piece to build a song from. We record everything we jam on and we have a giant stockpile of unfinished stuff, so sometimes we go back and find stuff in there to try again but we’re pretty picky. We try to keep to pretty loose and try not to think too hard or work too hard on something.... Cause if were working too hard, it’s usually not working.

As popular as duos are becoming they are still the minority. And they all get compared to each other to because it isn't the way a rock band is traditionally done. As more duos start to pop up I don’t think it will be such a big deal.

BRCM: Have you ever been to the crossroads, and, if so, who did you meet there?

BRCM: You're based out of Toronto, Canada, a bit of a journey from the Mississippi Delta and Hill Country, but your brand of punk/Blues boogie seems to draw very directly from the sounds emanating from that area. Do you subscribe to the notion that the Blues is universal, or is it a learned thing?

ST: We both grew up in pretty rural areas, so that might have something to do with it. But locations and eras don’t seem to be as definitive as they used to be in music. Different styles are coming out of every part of the world because there’s little to no cultural isolation anymore. As always there are amazing garage and blues bands from all over Europe as well, just like the Blues explosion in Britain in the 60s.
So yes, Blues is definitely universal.

BRCM: How does Toronto respond to your brand of Blues? Are there fellow compatriots we should be on the lookout for?


ST: In Toronto we play with a lot of different types of bands from roots to punk to indie. But just like anywhere else, people respond good rock and roll. There’s an amazing bar here called ‘The Dakota Tavern’ which is basically a basement all decked out like a barn. The management is really selective and focuses on booking blues, country and roots bands. The place is packed to capacity almost every night with all sorts of people, especially people that you wouldn’t pin down as country or blues fans.

So, again this kind of music just strikes a chord with people no matter where they’re from or what they’re into.

Definitely look up The Schomberg Fair and The Skirt Chasers, who also played Deep Blues last year. Also check out our bros Catl.


BRCM: Tell us about your best and worst shows.

ST: Best show: Playing an outdoor diabetes fundraiser hosted by bikers. It was for a good cause and bad ass. Plus bikers have insane stories to tell.

Worst show: We once got roped into playing an office Christmas party. It was just as bad as it sounds. Also, someone brought a baby, so that baby is probably deaf now.

BRCM: How did you come to be involved in the Deep Blues Festival? What were your experiences at the Fest?

ST: We heard about the festival in late 2007 by way of Rick Saunders blog, and when we saw the line up it was just too insane to miss.

We’re big fans of anything coming out of Alive Records, Fat Possum and Voodoo Rhythm, and the chances of seeing those acts in our neck of the woods are pretty rare... Not to mention seeing them all at once. So we made the 16 hour drive down to Lake Elmo in 2008 with some friends and we couldn’t believe it.

Playing the festival this year was completely surreal. And because of the festival and Chris Johnson we’ve played shows with John Schooley and The Black Diamond Heavies here in Toronto. Something that seemed ridiculous just over a year ago. There really is no better gathering of music and people in the world.


BRCM: What's next for the band? New record? Tour? Anything for us music-starved folks south of you?

ST: As you posted previously, we put out a split 45rpm with The Rue Moor Counts (another incredible band we met thanks to DBF) and we’re gonna follow that up with a new full length that we’re with Robbie Buxton of the Rue Moor Counts in the spring. After that, hittin’ the road.

The following tune comes from their split 7" with The Rue Moor Counts, which can be purchased, along with their album, Wild Sound, here. The video is a performance of a currently unreleased jukejoint stomper. More performances and tunes of the band and can be found at their MySpace page.


The Speaking Tongues: Looking In Your Window (mp3)