The Man That Time Forgot 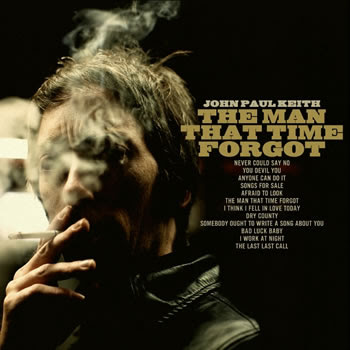 Well, hot diggity dog. Back again, jiggity jig. Let's not mess around, and kick it.

The best band in America has a new record out on Big Legal Mess, and we're here to sermonize.

John Paul Keith should be familiar to most of y'all. I damn near fell out of my chair covering his last record. His new record, "The Man That Time Forgot", may be even better. Really.

We've preached before that Mr. Keith is a songwriter with a timeless brilliance: 2 1/2 minute songs, honky bar-hook-filled and longing, desperate and full of belly up to the bar observation.  It's rock'n'roll, without the pretense, country-fried, soulful, a little boozy, a little trashy, a little bit dance 'til the end of dawn.  Imagine, if you will, that Buddy Holly took the template for "Rave On", and made a long player record with that aesthetic.  Seriously, stop for a moment, and imagine it.  But he didn't.  John Paul Keith did.  And the world is a better place for it.  Oh, and John Paul Keith has better hair than you.

So. The new record, then.

From the punkish, Summertime Blues jab of  "Anyone Can Do It" to the Here Comes a Regular regret of the title song,  "The Man That Time Forgot" is a bar record, running the gamut from entry to last call .  12 songs.  That's all you need (that's all you ever need).  Especially when they're these 12 songs.  Follow the track listing from braggadocio to reflection, with all the classic moments in between.

Gonna track this record from start to finish.  It's not a "concept" record in any way other than our perception.  But we're gonna work on theme of our own creation, and in the process hope to convince you why this record is a masterpiece.

Kicking off with the raver (all hand-claps, greasy organ, and raving vocal), "Never Could Say No", , and the immortal line "Flying overseas with the Flipside Kid" (a Jack Oblivian reference, who Keith tours with and backs), Keith sets the stage, a willful roue, blaming others for his appearance at said joint.  Follow that with the rollicking,  barrell-house piano two-stepper "You Devil You"  (he sees the girl), and we've got a situation.

The next three songs set the stage.  The aforementioned "Anyone Can Do It" shows a punkish strut, and "Songs For Sale" is the 50's-informed groover, the sensitive guy laying out his cred.  "Afraid to Look", led by greasy keys, is the dance, the manly man strutting his shit.

But with any encounter, self-doubt creeps, and "The Man That Time Forgot"  weighs in with an early night lighter-raiser, a honky tonk ballad full of ripped guitars and reflection. Follow that with "I Think I Fell In Love Today".  Like Tom Waits' "I Hope I Don't Fall In Love With You" , we're looking at the weird moment between booze-fueled courage and resignation.  But the night is still young...

So John Paul Keith takes a break, and in the garage-country track "Dry County", full of rave-up geetar and hollered backing vocals, we leave the bar with our best buds,  looking for a little balm to heal the perceived wounds.  But, consarnit, we're stuck in a land without liquid refreshment...so, back to the bar, and an atonement..."Somebody Ought to Write A Song About You".  This song is pure Southern Soul, scratched guitar and more greasy organ.  We're back at the bar, and the girl's still there, and our hero wants to transform  his perceived love into the immortal. But...and but...he's "Bad Luck Baby", another surging riposte on condition, and why men are bad, bad news.

Fumbling into the night, then.  another ramped-up organ-led moment, "Work At Night".  Who's he working for?  That's up to you, but DAMN, the band gives us a greasy workout!

And, finally, the most completely Country song on the record, "The Last Last Call". Pure Country weeper. The ultimate barstool lament..."So here's to you and to me". Does he get the girl?  You'll have to find out for yourself. But he's toasting, and we're drinking, and our boots are on the floor, and we're gonna wake up, and probably do it all over again.

To reiterate, this is not a concept album, that's our own take on it. What it is, is...another brilliant album from John Paul Keith. Another entry into "perfect record" status. What more can I do to get y'all to worship this cat?

Every song on this record is perfect. You owe it to yrself to own it!

Please support...well...what more can we say, over and over? Buy records from non-corporate labels! Check out shows in yr neighborhood! There's a world of great music, just waiting for you!
Posted by Brian K Reese at 8:30 AM 4 comments: Links to this post