Sorry to have been gone so long. I know everyone's day revolves around a new post from me.

This is the laziest post i've done. Just not much energy, but wanted to confirm i'm still alive.

Didn't get the secret job. Stuck at the bookstore. 'Course i'ts not really a bookstore, per se. It's a college bookstore. Loyola University Bookstore. And it's a Barnes and Noble affiliate. I'm a sellout. I'm depressed. This is my life. Yep. Kill me know.

Apologies to those i've been out of touch with over the past week, particularly mr. TEAII. Things should settle down a bit, once i get used to my schedule. I'll have better posts. Really.

Wanna post some songs, of course. As promised, they're niteswimming songs. I've tried to avoid putting up songs i've gotten from other music blogs, cuz i can never remember where i got them, and can't give proper credit, but i'll make an exception this time.

The Joel Plaskett Emergency...well, I know nothing about this band, but they're on my list of albums to buy based on this sole song...it's a lovely little number with surging guitar toward the end.

King Creosote... same deal....no idea anything about this band. But this song is one of my top 3 favorite songs i've downloaded. It's...well, listen. Worship.

Neil Halsted. Neil is the singer/songwriter for the vastly underrated Mojave 3, formerly the vastly overrated Slowdive. This is from his solo album Sleeping on Roads. His records are a lush mix of alt-country and Townes Van Zandt sadness, filtered through a Nick Drake sensibility. Every song on this album is brilliant, but this tune seemed to fit the theme...traveling at night...the moon, her majesty...sadness.

(click on song...let the moon guide you to the briefcase...rays may be found there)

I'll try to do better. Talk to me 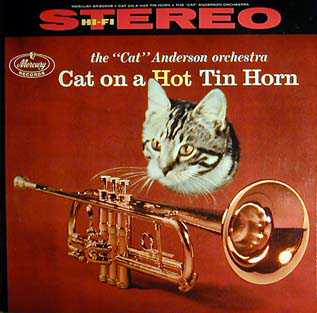 Been a busy week, with job and job interviews (we're still keeping our fingers crossed about the surprise job). And of course Amber. Who's Amber? She's the latest addition to the Berg-Reese family, a 5 pound 5 inch ball of energy and joy. And she's trouble. Amber came to us via Nancy's boss, whose children would not let the little darlin' have a moment's peace, often sending her running to the basement to hide. Poor thing. Been awhile since i had a little pussy, so it's some adjustment...but i'm loving every minute of it. May i draw yr attention to the bottom of the post for a very special Amber version of the song postin's?

I'm really pissed off at Volkswagen. First they destroy Nick Drake, then Cat Power. Now they've seen fit to completely misinterpret another of my fave raves, Richard Buckner. Granted the man aint rich, and could probably use the dough, and of course, he had to agree to them using his song.....but jeez! I mean, are people really going to rush out and buy his albums now? Are we going to be faced with frat boys at his shows yelling for the "tv hit", while he's trying to play? And, god forbid, will those damn hippie "twirlers" start showing up trying to ruin my buzz? Buckner's drinking music, pure and simple. Or driving through the desert. Or both. I just...I...awwww man. I'm bummed. But, enjoy the bread Richard, I guess.

I'm now online elsewhere on the World Wide Web. One of my favorite mp3 blogs sent me a mix cd to review. He'll be posting my comments, along with three other people's, over the next two weeks, along with the songs to download. Started Monday...continues on....so you may have to scroll down the page a bit when you get there. Where? you ask? Why at The Tofu Hut, of course. Click it and enjoy. (His site is way better than my'en).

Go here for some fun times at work. I'm waiting for my blog to appear.

Andre Williams is a dirty old man. He started out in the 50's writing songs for all kinds of greasy R&B groups, disappeared for awhile and resurfaced a few years ago, aided by such "garage'n'soul luminaries as the Jon Spencer Blues Xplosion, the Gories, and the Dirtbombs.
This is a track from Las Vegas Grind Vol. 2. He's singing about kitties.

Jimmy Smith is one of the alltime great jazz organists...he's greasy too. No roller rink in site for this brand of jazz. From the album The Cat, no less.

I don't know who Loo and Placido are. This is one of them there Mashes (if'n yr the maker of this mash, lemme know...i'll credit ya). Song's called Nellycats, and all will be made clear at the 49 second mark.

Finally, we've got The Lightning Beat Man. Go to his record label's website for all kinds of fun downloads and albums. More kitties. Hooray.

Next post will be Moon Songs. Realize i'm putting way too much garage 'n jazz. Something to soothe the nitetime soul seems in order. Til then.... 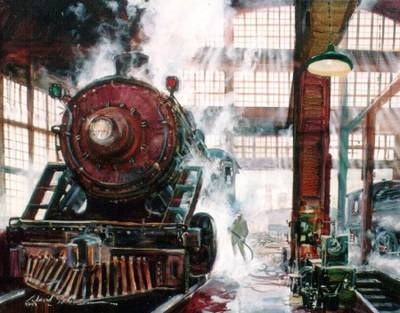 I'm back, and with tunes, no less.

I don't have much time to post today, so it's going to be a quickie. I do want to draw everyone's attention to the links i've added. I've got more...so keep yr eyes peeled. Also, the next post will be a special edition commemorating the newest addition to our family. Should be fun.

Wanted to say to all those eagerly anticipating the beginning of my Big Book phase...well, it aint gonna be. I just don't have the time or energy to devote to Proust. So for now it's "trash" novels of a sort. Starting with Elmore Leonard and moving on to Walter Mosley. Great novelists, really, that get a bad rap for being "genre" writers. What balderdash.

Finished the new McSweeney's. Pretty good. Don't have alot to say about it really...I would recommend picking up the author's individual works, but it's as good an intro as any. Sorry not more to say about it...it's a little too scattered and not completely representative. Plus it has a large amount of essays that might be meaningful to long-time comix readers, but if one isn't familiar with the subjects, the essays are merely tedious. Think i'll get around to an all comix post one of these days (boy i'm full of promises).

Been taking some heat for my politics lately. Oh, well. Formulating a proper response.

Songs. Today is Train Wednesday. (not the band Train...ugh.). I've got about a million train songs, so i'm thinking of making this a bi-weekly thing.
Y'all know the Pogues. You know i worship the Pogues. Got a rare bootleg for ya today. Fun.
The Derailers are a sweet little band from Texas in the tradition of the Mavericks. Chugging, beautiful guitar, bitterweet lyrics and voice that would make Roy Orbison proud. This is another tune in my canon of all time favorites.
If i were an honest man, i'd admit i'm not the world's biggest Indigo Girls fan. (opinionated bastard). I'm an honest man, so i'll also admit that they've never really done justice to any of their covers, particularly "Romeo and Juliet" and, of course, Gladys Knight and the Pips' "Midnight Train to Georgia". So, i'm gonna give you Gladys.
And, finally, Phillip Walker. I'm not entirely convinced this song is actually about choo choo train trains. hmmmm...But man, oh, man do i love this song...raw, bluesy, primal. I seem to like that stuff. ok, gotta pabst blue ribbon beer calling my name.

The Pogues: Train of Love (mp3)

Gladys Knight and the Pips: Midnight Train to Georgia (mp3) 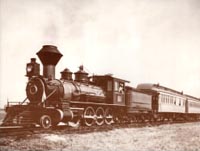 Posted by Brian K Reese at 5:13 PM No comments:

Welllll, howdy. Guess I scared y'all with that last post. No, I'm not currently trying to quit smoking. It's a nice dream, though. Filthy habit. Dja ever notice the less yr finances are, the more you want of yr addiction?

Speaking of finances, I got a job. Maybe two. The definite is a temporary position with a bookstore, that could lead to permanent. I feel, though, as if that's leading me backward and not forward. So, I went to a temp agency today. They seemed pretty impressed with my resume, particularly my willingness to work for a non-profit (ah, the glories of idealism). So, they set me up with an interview in a temp-for-hire situation on Tuesday. The job would be right up my alley, and would entail considerably more money than the bookstore job. I don't want to jinx anything right now, so the details will have to wait. All i'll say is that the position will probably raise an eyebrow or two...heh.

Give it up for Rick James, dammit.

Are we enjoying the music? Does anyone have any requests in terms of style? (was that a lame attempt at getting people to post comments?) Tell me what you want. I'm working on redesigning this site. I just got an ftp downloaded...but i'm still trying to figger out how to work the damn thing. sigh. This'll allow me to post the songs directly instead of making y'all go to my briefcase. Also, I'm collecting links, which you should see in in a week or so. I highly recommend checking them all out.

Today's tunes have a very slight connection. I'll let you figure it out. The only thing i'll say is that they all rate a 5 in my Media Player, and an all-time favorites spot in my playlist. Oh, yeah, and Lee Hazlewood you might recognize as the man who produced all of Nancy Sinatra's 60's albums. Odd duck, him.

What else can i do?

(click on song...download from briefcase in the traditional manner that the lord has taught us) 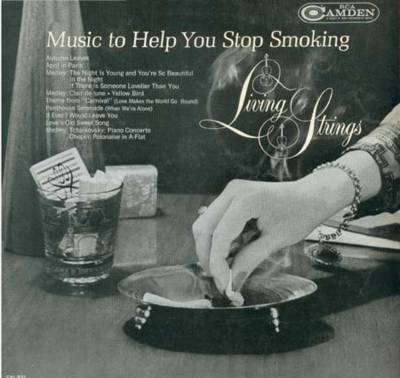 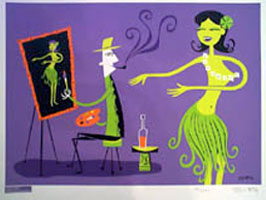 Hola. Not much to say today. But i was a very bad lad yesterday and didn't post any tunes. gasp. horror.

First, though, i'd like to draw y'all's attention to a couple of interesting websites.
The first is a wonderful little public service announcement from Mr. Will Ferrell. Highly informative, i must say.

Second, a main link. There's a bunch of stuff here, so for some highlights, click here, here, here or here. Hooray!

Also, thanks to Thurman for helping rescue Rev. Al from slavery. Here's the infamous speech.

I have no idea who Thee Mysterious Asthmatic Ranger is. Methinks he might be the legendary Billy Childish. Childish has released, by some accounts over 800 records, singles and cd's under various pseudonyms over the last 25 years, or so, most famoulsy under the name Thee Headcoats. Lo-fi, garage, folk ramblings. Oh, and he's a rather accomplished author too. This might not be him, of course. Who knows? The ditty is whole barrel of monkeys kinda fun.
Art Blakey is one of the greates jazz drummers ever. Period. This song is one of my favorites. Tribal and smoldering with a great vocal by Sabu. Intoxicating and great for yr next tiki party.
Finally, a little bit o'soul by a garage band from the 60's, collected nicely on the Nuggets Box Set from Rhino Records. Y'all know the song...but listen, my friends, listen. Hear the organ? The great fuzzy guitar? The vocal snarl turned pure Detroit soul? Yep, give it another try. Heaven.

Art Blakey: Won't You Come Out and Meet Me Tonight (mp3)