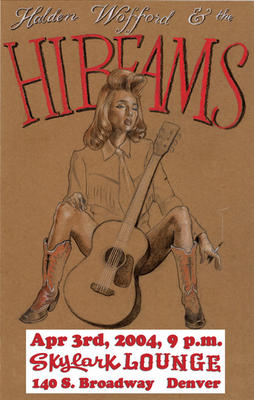 Vacation time. I'm off to the tropical climes of Denver for a week and a half. The usual sporadic posting will resume sometime the week after next. (it'll kinda be like I'm still here, only longer).

To celebrate my brief return to the Mile High (heh) City, a couple of my favorite bands from thereabouts.

While back in Denver, I'm gonna try to catch my favorite band, Halden Wofford and the Hi-Beams . For my money, they're still the best "unknown" traditional Country & Western bands around. I'm biased, of course, having spent a good portion of the time I lived in Denver watching them play, singing along a bit too loudly. They play the best kind of old-timey music, mixing in their own originals alongside all the best classics, transforming them into their own. Every show is a raucous Barn Dance, with folks from 18 to 80 drinkin', dancin', hootin', and hookin' up. God, I've missed them. Someone needs to sign this band yesterday. Below is one of their best songs, and a perfect singalong song.

Denver's got a shithot country music scene, with too many good bands to cover in this brief post. And more popping up, apparently. One of the original legends (and a sort of warped Flatlanders...more a legend...) was The Denver Gentlemen, featuring, among others, the talents of David Eugene Edwards,later of 16 Horsepower, and one Mr. Slim Cessna, now the namesake of the delightfully wrong Slim Cessna' Auto Club.
Cessna's music is at once hallowed and perverse, poking at the sacred and the obvious. It's music for worship of the Divine, and it's church is the local dive. And how can one not love a band where the accordion is one of the featured instruments. So, below is one of my favorite tunes, an ode to lost friends, removed from Denver, but coming home. And, yes, The 404 is a real bar, and Nonny's a real lady.

See ya when I get back.

Halden Wofford and the Hi-Beams: Yodelin' Rhythm and Blues (mp3)

I don't work for an Independent record store. I just really like them. Not so keen on Chains, though. Too sterile. No vinyl. Clerks don't know shit. You know the shtick.
Posted by Brian K Reese at 6:50 AM 3 comments: Links to this post 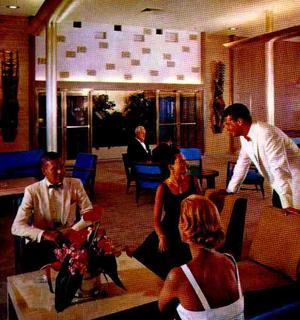 It's hotter'n hell here in Chicago, and no sign of a letup. Too hot,really, to spend too much time in front of a computer. Having lived outside of the MidWest for a time, I had forgotten about this wonderful humidity thing. Y'know, when it's cold you can add more layers. But when it's hot, and yr lying naked in a bathtub filled with ice, that's about the best you can do.

What helps, though, is perhaps a nice Zombie. Maybe a Mai Tai. a Rum Runner, or a Beachcomber. Of course the classic Pina Colada and/or Daiquiri can't hurt either.

It's a Tiki world in the good ole summer, and to help you mix your favorite Rum drink and dance the sweltering nite away, I offer the swinging island surf sounds of The Tiki-Tones. My ice is melting. Time for a refill.

The Tiki-Tones: Night of the Tikis (mp3)

The Tiki-Tones: One Mint Julep (mp3)

When its' hot out, Independent record stores have the coolest tunes.
Posted by Brian K Reese at 6:45 AM 4 comments: Links to this post

Boys, the Night Will Bury You 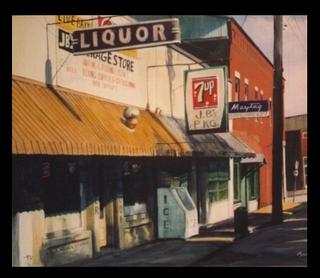 Gettin' ready for a big show tonite. Ok, a small show, really. Just big for me. I never miss this guy when he's in town.

Richard Buckner shouldn't be a stranger to regular readers here. To those unfamiliar yet, Buckner's is the voice of the loneliest of deserts, burnt and ravaged, songs for traveling. Music to drink whiskey to, the sparest arrangements cascading, beauty in the heart of sadness. Live, often just himself and his guitar, Buckner reinvents each song, allowing each line new life, new interpretation. You can hear the sand on the strings, bending each note, shooting them off into the night like signal beacons. His voice drawls and stutters, mumbles and meanders, demands and resigns. And those are the love songs. Not much like a B-52's show, then.

Since most of y'all probably own a Buckner album or more (with Bloomed and Devotion + Doubt as my personal recommendations to start with), I thought I'd toss up a couple of tunes not found on any of his proper records.

The first is his vocal contribution to Mr. Giant Sand Howe Gelb's side project, The Band of Ranchy Blackette. It's a duet with none other than Ms. Neko Case, herself. Hooray. The second is a downright sprightly cover of a Kris Kristofferson chestnut. Please enjoy.

Band of Blacky Ranchette (feat. Richard Buckner and Neko Case): Getting It Made (mp3)

Go see Richard Buckner live, or check out his albums at yr local independent retailer. Gloom and doom, of course, are always free.
Posted by Brian K Reese at 6:45 AM 2 comments: Links to this post

Space is the Place 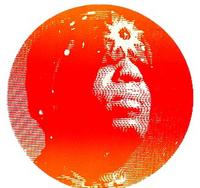 I know, I know...where the hell's the damn Country and Western I'm supposed to be posting all the time. Fear not, you'll get yr fill soon enough.

Til then, and cuz I feel like it, a little (all that)Jazz of a sort today. Or maybe it's not jazz. Could be doo wop, or blues, or just good ol'fashioned pop music. From Saturn.

I'm a big fan of Jazz as a genre, some styles more than others. But, truth be told, I'm a novice when it comes to talking about it. I simply don't know enough to intelligently discuss it. Particularly when there are blogs out there specializing in Jazz. I've also noticed when making mixes that it's tricky to isolate individual songs on most albums, as they're often of a piece, if not musically then thematically. Anywise, a wise fool once said to stick with what you know. And, you know, I don't know much, but I, erm, know what I like, or sumtin'.

Sun Ra came to Earth, for a brief time, from his home planet of Saturn. Some would like to insist otherwise, but pay no attention to the man behind the curtain. Look no further than his obscenely large (and hard to collect) body of music as proof that the man was nothing less than otherwordly.

He's classified as Jazz (or, avant-Jazz, whatever that is), with big band and swing overtones early on, but seems equally comfortable stylistically in warped R&B, street corner DooWop among the stars, and Rock and Roll as heard bouncing off the tin insides of a lost spaceship somewhere out in the cosmos. I've rarely, if ever encountered an artist harder to pin down. Probably the way he liked it.

There's as many Sun Ra recordings as there are stars in the sky, under various combos and names. A couple of good places to start searching are here and here. Way more info than I can provide on the man himself can be found here and here.

Couple tracks, then, to whet yr appetites for a lifetime of collecting and record bin trawling. One from We Travel the Spaceways, and one from one of my favorite records of all time, the dark Walt Disney tribute, Stay Awake. His choice of Disney cover, in particular is brilliant and apt, and watch for the drunkenly chanting Arkestra.

Sun Ra and His Arkestra: Pink Elephants on Parade (mp3)


Saturn is a proudly independent planet.
Posted by Brian K Reese at 9:30 AM 3 comments: Links to this post

I hold in my hands (actually, on my hard drive), an exclusive recording sure to Please! Thrill!! and Astound!!!

I received yesterday, from somewhere South of Hell, France, a song. Not just any song, mind, but a version of the very heart and soul of this here little corner of the world.

Now what makes this version such a treat (besides the fact that it kicks ass), is who it's from, who the musician performing it is. Perhaps he's too shy, or lacks the ego, to push his own music on his own site. Maybe he's too busy ministering to his worshipful flock. Whatever the case, you should be aware that the Good Reverend Frost, himself, from your favorite and mine, Spread the Good Word, has been a very busy man with the geetar, and sundry other instruments of a most holy nature.

Recorded at 3 a.m.,presumably after hours of prayer and meditation, and intended as a demo, I say, good sir, that it is perfection incarnate. If you download only one song this year, this should be the one. Reverend Frost was kind enough to grant permission to me to post this, and you should go visit him at his site and thank him. While yr at it, demand he post more of his own music. I know I want more.

Ladies and gentlemen, boys and girls of all ages, kneel now at the altar of Reverend Frost.

Nothing to buy yet, so head over to the Good Reverend's website and offer him prayers and worship. Thank you.
Posted by Brian K Reese at 7:00 AM 4 comments: Links to this post

I'm a Doctor For Women 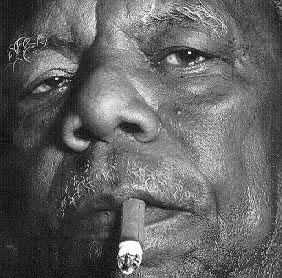 Think I've got my bandwidth back. Mmmmm....bandwidth.

I haven't forgotten about the Fringe Hall o'Fame thingy, by the bye. I'm just giving it some time before posting the next poll. We aint exactly the Baseball Hall in terms of exclusivity, but it'd get a bit tedious to have new entries every month. Kind of meaningless, and watered down, then. But I've still got several guest posts in the pipeline, which should start appearing next week sometime (promises, promises). Also, I've been kinda subtly (or not so) posting some folks I think might be Hall-worthy (Bobby Bare, Mick Collins/Gories). And now this fella:

Barrellhouse, boogie-woogie blues pianists, New Orleans had and has plenty. But Champion Jack Dupree, to these ears, was one of the most distinctive. While he left the crowded New Orleans scene early, and eventually, like many great musicians, found fame in Chicago and overseas, his playing never lost the roots of his hometown. Playing straight up, with very little concession to pop, and no interest in ballads, it's good-time, jukejoint music, infused with a strain of social protest well ahead of it's time. He could be called the Chester Himes of Blues.

Dupree led what could easily be called a fascinating life. Indeed, he actually was a boxer, fighting in over 100 bouts, earning the "Champion" moniker winning a boxing championship in Indiana. He served in World War II as a cook, eventually spending a couple of years in a Japanese prisoner of war camp. He lived out the last of his days painting and living in Germany.

One of the things I love about pre-Rock 'n' Roll is the way musicians were forced to speak in metaphor. You couldn't come out and say Fuck on most records (though their were plenty of "blue" albums and sides floating around). No, everything had to be couched in doublespeak. Do we really think blues musicians were actually interested in long black snakes? And why did so many women have cats sitting in their laps? Most of this, of course, is cliche now. But one had to be more creative with their lyrics pre-60's. And Dupree was one of the best songwriters around. Smart, funny, ribald, serious if necessary. And, apparently, his woman made good jelly.

As you well know, the Mountain always encourages folks to visit their local independent doctor, liquor store, and...erm...jelly seller.
Posted by Brian K Reese at 7:30 AM 1 comment: Links to this post