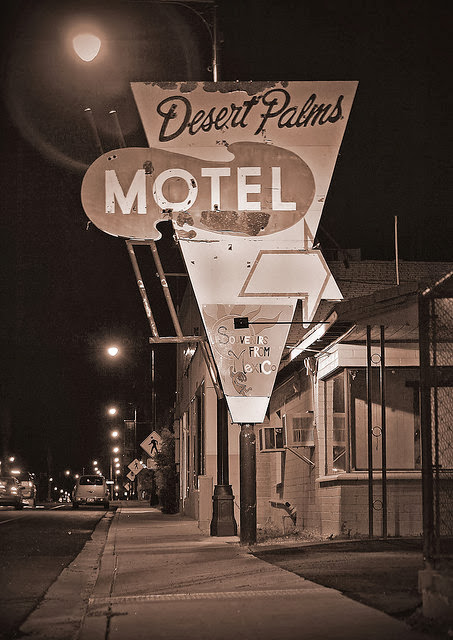 There's a special place in the world for the "burnt desert" song...a world of sneaky rattlesnakes and echoed canyon noir, songs of traveling and dust, the cactus dry yet alive, the kicking vintage truck transporting all manner of bad behavior and innocence freighted belief.  Where the laws of men  inhabit the expected, and the pistol could jam with sand and the Mariachi band is playing not for profit but for survival.  The outpost is an empty tank away, the beer is on ice, melting, and the lizards are scrambling, hissing and flared.  Step into the sepia-toned light, then, with bleached bones and death rattle and cosmic, red-hued hum..Georgiana Starlington.

Not a person, but a band.  The darkest twilight criss-crossed lightning across the plains, finding the patter of a windstorm on vagabond tin-roof porch, beat beat beat the rhythm of safety and danger, lone yet part of the mythology of the West.

Georgiana Starlington is made up of  husband and wife Jack and Julie Hines (also of the mighty K-Holes), along with Daniel Sheerin on  drums and percussion , Andy Curtin on pedal steel, and Vashti Windish on singing saw. Their record, Paper Moon (out on Hozac),  occupies the space inbetween the raindrops.  The curdled muddy footsteps of bad deeds and the sinister sway of hardboiled regret.  Jack and Julie trade vocals, occasionally as cow-noir duets, his voice a bourbon ramble, hers a gauzy gingham chanteuse, and surround themselves with hazy blanched rhythms and sound.  A rumbled sand-surf guitar line, lonesome desperate pedal steel, the keening of a singing saw, midnight church harmonica.  All hymns of hazy, steepled mesas.

Tracks like "Hard Grave",  "The Great Divide", "Dry As A Bone", and "Days Like Heaven" shimmer like pale desert nights. "Moonlight" the saddest pedal-driven cowboy lament,  campfire and crickets. And "Gust" is perfect, a rough-hewn diamond, sparkling darkly.

An essential album for anyone visiting these here sites, and easily one our best records of the year.


From The Paper Moon Demos (free on Bandcamp)

Rocket To The Moon 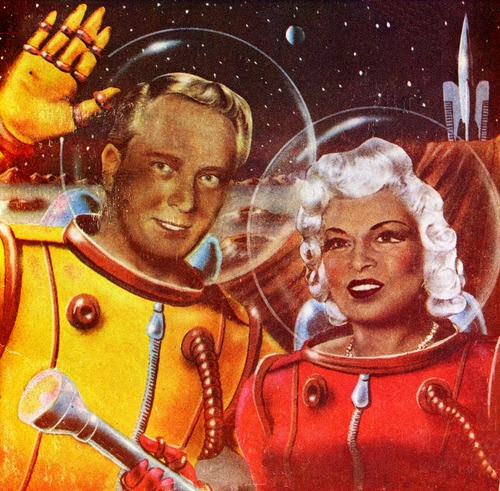 Space is the place, as our buddy from Saturn, Sun Ra, used to say.

And that's today's theme in our ongoing series, Essential Comps Everybody Should Own!  (or something like that, we're still tweaking what we're gonna call it).

Buffalo Bop  has been a force of nature in comps for a good while now.  They're loosely associated with/helpfully distributed by, the essential Bear Family Records. Buffalo Bop comps usually have a theme: Drinking, Juvenile Delinquency, Trains, Hot Rods, Rockabilly, Jungle, etc.  All the things that the Mountain loves. Many of the songs are from public domain or from regional record labels of the 1950's and 1960's.  All of their comps are highly recommended by us!

One of the more interesting of their comps is Rockin' Orbit, a collection of Country-Billy space-themed tunes informed by Cold War, nuclear fallout shelters, comic books, and the search for the "other" in the grand spinning diorama above us.  There's some cheesy stuff, and lots of "count-downs" in many of the songs (kinda charming in a way-back-when way), but when the Country and Rockabilly kick in, it's killer stuff! Kickin', hollerin' cows on the moon space-billy goodness!

Take a time travel to distant worlds, then, a rollickin' hillbilly take on the space race, greasy rocket fuel and juiced-up dreams of mysterious night skies and escape!


Support yr local artists.  To the moon and back!

Posted by Brian K Reese at 8:30 AM No comments: Links to this post

Growling At The Moon 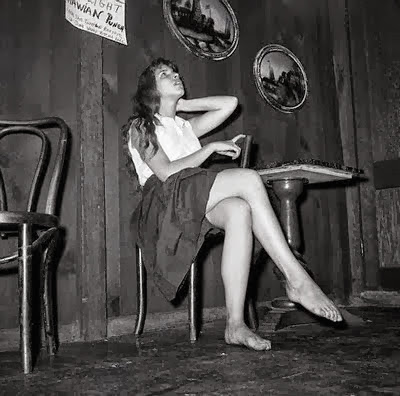 Got a poll over to yr left.  Going forward, to help us post more regular-like 'n' shit, we're gonna set up a series of themed-posts.  Some y'all will recognize.  Others are new.  Let your voice be heard!!  You can vote in multiple categories.

Now that that little bit o'business is over...

One of the great artists playing at the fest is Lone Wolf OMB.  And he's our cover artist for this post...

We have a great love for one man (woman) bands....it's got a bit of history...Abner Jay, George Coleman, Molly Gene, Bob Log III, Hasil Adkins, Husky Burnette, Baby Ruth, and, well..check this link (we're still working through it ourselves).  What makes them great, besides the killer tunes, is the unique personality infused into the performance.  While the records are great, the real joy is seein' 'em live (those that haven't passed, that is).   We're due for a length piece on One "Person" Bands, and the inherent meme thereof shortly (but asking for a longer piece). For now, let's concentrate on one...

A voice, stomped and filtered through the finest Florida tar, look and see the Man, regaling the disintegrating concrete, fluid and distilled, bad whiskey in delirium tremens....you didn't know the dance you made, but it was the ends of the earth..thus, is Lone Wolf OMB.

As always...please support yr local artists...see a show, buy some merch...that's how these folks make their money.  Music aint free...these folks are workin' and workin' hard for pennies.  Ya like what ya hear?   Thank the bands by helpin' 'em make a living.

Posted by Brian K Reese at 8:30 AM No comments: Links to this post