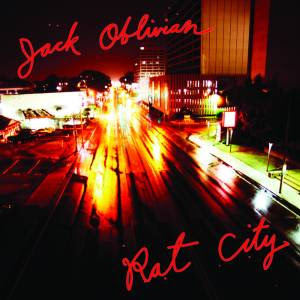 So...between the death of a beloved relative, revised worked schedule, our trip to to the Big Big City of New York for the Norton Records 25th Anniversary blowout, and general idleness....we're god-awfully behind....but then, what's new?  So, here's our new modus operandi for the next week or so...
You've heard of Nuggets, you've heard of Pebbles...we're gonna  give you Pellets.  Great records we're diggin', without the usual Big Rock Candy Mountain blathering on and on.  Following that, of course, is our annual, world-famous Xmas blowout.  Oh yes.  The Xmas love will begin, and go daily, on December 1st, so keep yr calendars updated.

But, let's spend the next couple of weeks catching up on some great new records from this year.

It's astonishing we haven't covered Jack Oblivian over these years. at least not in a singular record review, rather than a gushing overview of his works.

Jack Oblivian was, of course, a member of god's favorite band, The Oblivians, which should be enough, but let's say more..

Jack's (if he'll excuse the familiarity) new record, Rat City, came out this year on the mighty Big Legal Mess record label.  Of the three Obvlivians, Jack hews closest in his records to the spirit of previous band.  And on Rat City,  Mr. Oblivian (he seems to be the only one carrying on the surname) furthers the legend of the trash aesthetic laid out by previous releases, but mixed with a mop bucket's worth of tunefulness and, dare we say, wistfulness, but never coy, never sentimental.

So, a record of dilapidated splendor, the sparked neon of the last bar on a rainy street, your last hope blinking, and bleary-eyed, you stumble in, looking for salvation in darkness, and the last band on the planet is playing to 5 patrons, who know, yes know, the power of last call, and the temptations that lie after.  This bar never closes, and the stumble of after beckons, afraid of the light that morning brings.

We can't tell you where "Rat City" is...you know it, or you don't, but Jack Oblivan lives on the edges of it, tipping a faded, tattered fedora to the denizens. clutched with dreams and opaque promises.  "Rat City" breaks no new musical boundaries, nor should it.  It's a Southern, sneering rawk'n'punk-ass record of timeless qualities...booze, cooze, and loozers, floundered, desperate in its bourbon-soaked tabletop, slippery brass rail as heaven.

Amidst the swill, Oblivian's voice is a raw "seen ya" gargle, playing off the loose with the bar-band instrumentation... "..and now I'm playing records just as loud as they will go, gotta disc jockey jive on a late night radio show".

If you've got a rawk'n'roll heart, this is yr record!

Please support yr local, independent rekkid store or label.  Fuck the Top 40, who needs that shit?
Posted by Brian K Reese at 8:30 AM No comments: