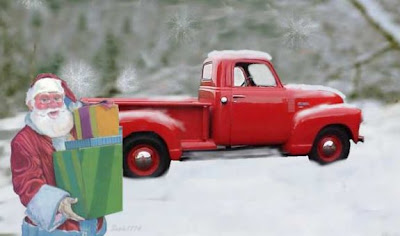 Honky Tonk revivalistDale Watson gets busy this Holiday season lending a his 18 wheels to the Santa Claus cause, then taking a break in the land that Frank and Bugsy made.

We'll have another Big Rig Holiday post further down the line, so keep your ears on, good buddies. And don't forget to tune in Saturday for a special treat.

It's hard out there for a trucker. Support your local, independent diesel manufacturer.
Posted by Brian K Reese at 7:39 AM No comments: Links to this post 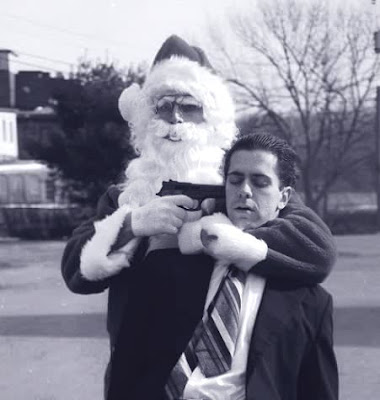 Ack. Too much Holiday cheer last night. I got nuthin' to say today. Please help the Mountain recover by enjoying these fine Xmas Soul sides. They're mighty fine tunes.

Please support your local, independent Union of Santa Claus Impersonators.
Posted by Brian K Reese at 7:54 AM No comments: Links to this post 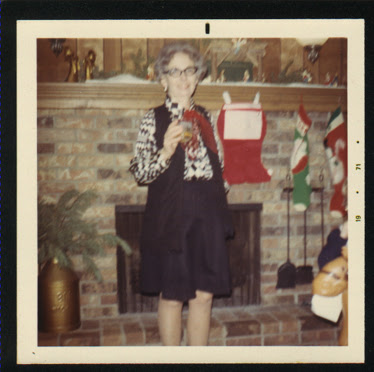 Instead of an elephant, the Mountain really wants a whole new design for Xmas. Unfortunately, the Mountain is ignorant when it comes to web design. Anybody want to win the chance at fame and glory by redesigning the ol' Big Rock Candy Mountain? Or maybe I should just stick with the elephant.

Time to take out the trash.

Hasil Adkins might well be the King of the Mountain, representing all the things we love here. A little Country, a little Blues, and a whole lotta Raunch'n'Roll. Today, The Haze brings the third "boogie" in as many days. But this aint your father's boogie. No sir.

The Honeymoon Killers , featuring members of Pussy Galore, Knoxville Girls, and Boss Hog, bring a special layer of grime and sleaze to the proceedings.

Don't forget to tip your trash collector this Holiday season. They've got all your dirty little secrets.
Posted by Brian K Reese at 7:32 AM No comments: Links to this post 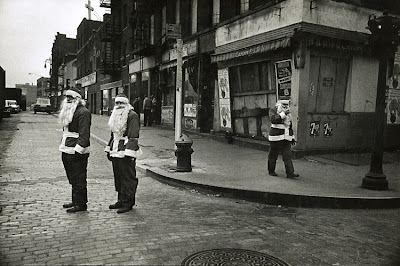 Me? Since you asked, I'd like to have an elephant for Christmas. But, alas, Mrs. Mountain won't get me one. Says we don't have room for it. Instead, I'll give you one. On Saturday. Stay tuned.

We're gonna do a jump blues and rhythm today.

Boogie woogie piano great Roosevelt Sykes would like to help you with your stockings this year.

Jump Blues master Roy Milton is lonely this Holiday season, and wants Santa to help him out. Strangely enough, he says "I'm gonna hang his sock high on some Christmas tree, so Santa Claus can bring my sweet baby back to me." I don't know many people who can fit inside a sock, but I'm not Roy, so perhaps he knows something I don't.


Roosevelt Sykes: Let Me Hang Your Stockings In Your Christmas Tree (mp3)

Please support your local, independent hosiery shop this Holiday season.
Posted by Brian K Reese at 7:20 AM No comments: Links to this post 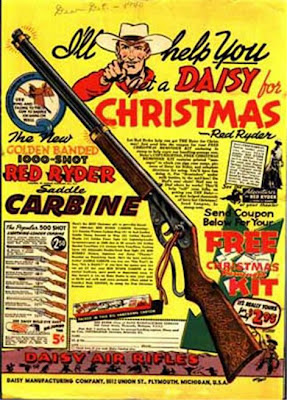 Feeling a little old-timey today. Everybody gets a yo-yo, a Tonka truck, and, of course, an Official Red Ryder Carbine-Action Two-Hundred-Shot Range Model Air Rifle with a compass in the stock and this thing that tells time for Christmas this year. Eyes be damned.


The Prairie Ramblers are probably most famous nowadays as the band that gave us Patsy Montana. Their song "Cowboy Santa Claus" features one of the greatest lines in a Christmas song, ever: "He totes a .44, and wears a big white hat/And he shoots from where he draws."

The Davis Sisters are renowned as the starting point for Skeeter Davis. On "Christmas Boogie" they bring the hillbilly straight to your chimney.

The Mountain reminds everyone to drink plenty of egg nog and Holiday grog before gettin' your gun out to take a few potshots at the neighbors' Christmas decorations. Even better if the young'uns are around.
Posted by Brian K Reese at 8:20 AM 4 comments: Links to this post 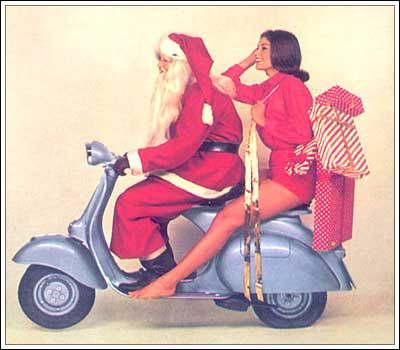 So. On Saturdays between now and Shane Macgowan's birthday (that'd be December 25th...what did you think we were celebrating around here, the birth of Big Baby Jesus? Everybody knows he was born on November 15th.), we're going to present some special Holiday mixes for all y'all.

I've received numerous requests for songs posted in past years' Holiday extravaganzas, so I done figger I'll do my best to accomodate y'all, near as I can. Today, we've got an extra special mix of the best Xmas songs from our first year of Holiday goodness. Perfect for parties, you can download and press play (or "drop the needle" for those of us who love our vinyl). Guaranteed to make your party the best party in town.

Stop by this spot during the week for fresh new Ho Ho music, and Saturdays for further swell mixes.

For now, please enjoy the superstars of, erm, Season One.

Please support your local Salvation Army bell ringer. It's cold out there 'round the old bucket.
Posted by Brian K Reese at 8:00 AM 4 comments: Links to this post 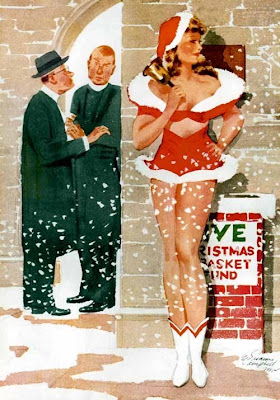 Hey ho, it's the day after Thanksgiving. And that means mighty big fun here at the Mountain. From now 'til the culmination of the Holiday(s) season, we're going daily (well, Monday-Friday, with very special posts on Saturday(you really want to tune in for Saturday's posts). We take Sunday off, as it's a holy day for football('merican version)). We've searched the globe for the swellest Holiday tunes, and we're presenting them to you, our loyal 3-5 visitors. If you're looking for traditional carols or the latest Mariah Carey travesty, this probably aint the place for you. If you like your Holidays a little...off, then we're here to help you out. A little Country, a little Blues, a little Trash, and a whole lotta love.

Figger we'll kick things off today with a little Wanda Jackson, Queen of Rockabilly and one of the Mountain's secret girlfriends (don't tell Mrs. Mountain).

The first tune ("Rockabilly Santa Claus") is the real treat here. The second ("Blues For Christmas") is Wanda getting a little bluesy.

Stop back on Saturday for more fun.

Truck You, You Truckin' Mother Trucker 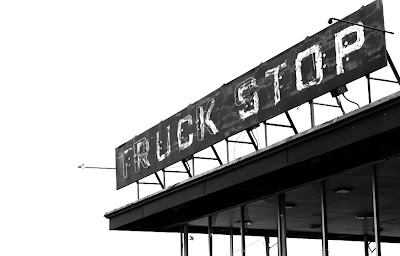 Boy Howdy, we've got a fun musical selection for you today.

First, though, a reminder. Regular visitors here (those that found their way back after The Great Disaster) will probably remember what happens here the day after Thanksgiving. For those who are new, or have forgotten, The Mountain goes daily(!!!!) with our 4th Annual Holiday Extravaganza. It begins the Friday after Thanksgiving, and we've already got some special treats lined up, so git yerselves ready.

In addition to regular posting, we seem to have allowed a few of our bread and butter Mountain obsessions to fall by the wayside. We're going to remedy that a bit today.

Trucking songs. We love us some hot truckin' here at the Mountain, it's one of our fave rave genres, and it's been a while since we, ahem, shared our love with all y'all. We got your diesel fix. Below you'll find a very special Big Rock Candy Mountain mix made especially for you. It's got a little new, a little old, and a little strange. Some I've posted before, some not. I've got literally thousands of truckin' tunes, so we're only scratching the surface here. Maybe we can make this a regular thing here. What do you think? Do y'all want more Big Rig hits from the Mountain?

Please support your local, independent Truck Stop.
Posted by Brian K Reese at 7:38 AM 10 comments: Links to this post 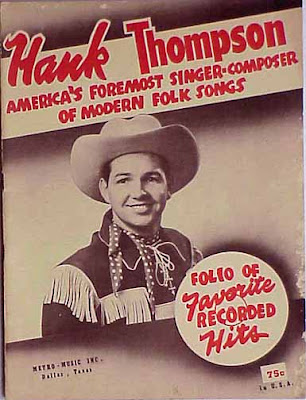 Tough couple of weeks for fans of the type of music we dance to here at the Mountain.

First we lose Porter Wagoner, who I wrote previously about here, and who I will have a bit more to say about in late December.

And then, a couple of days ago, we lost Hank Thompson.

I've referred to Hank Thompson before as one of the Holy Trinity of Hanks (with Williams Sr. and Snow).

A Texas boy, Thompson followed the traditional route to Honky Tonk stardom, hitting the talent shows, jukes, local radio shows, and state fairs, before catching the ear of someone famous (Tex Ritter in Thompson's case) and getting signed to a major recording contract. Typical stuff for your average Country superstar in the period containing the '30's through the '60's.

With his backing band, The Brazos Valley Boys, Thompson forged a mesh of hardwood honky tonk, Western Swing, and lonely weepers. He even managed an influence on Rockabilly, giving Wanda Jackson a nod and early support. Through the 1950's and the beginning half of the 1960's, Thompson racked up an obscene amount of hit singles on the Country charts.

What's most striking about Thompson is his vocal style. Not one for range, he created a languid and familiar delivery, instantly recognizable, perfect for the dance floor, the saloon at closing time, or an afternoon on the road, AM radio static through the shitty speakers in your pickup truck.

Musically, the cat could swing. Thwapping trap sets set the pace for his rave-ups, daring you to boogie, with jukey guitar and pedal steel filling in the space around Thompson's observational tones. He could send you up and take you down to your lowest nadir in the space of two and a half minutes. He could make you sweat and make you cry.

Thompson may be best known now for his clutch of classic drinking songs, and his album "A Six Pack To Go". I'm covering those today, in a double site posting, over at Barstool Mountain, naturally.

But Thompson was also a master of the "lost the girl/can't get the girl/never had the girl/the girl cheated on me" branch of the Honky Tonk nation. And these are what I've chosen to post to his memory here. I've also tossed in his most memorable "novelty" song, "Rub-A-Dub-Dub", and his version of "Oklahoma Hills", which is not only one of my favorite songs, but Thompson's take is, in this fan's humble opinion, the best version put to vinyl.

Again, head over to Barstool Mountain for Hank's drinking songs.


Hank Thompson: The Wild Side Of Life (mp3)

Hank Thompson: I Wasn't Even In The Running (mp3)

Please support your local, independent, record emporiums.
Posted by Brian K Reese at 7:50 AM 2 comments: Links to this post