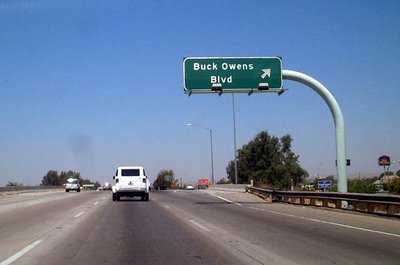 Sorry about that. Think I found enough bandwidth to get me through the rest of the month.

Time to close up the honky tonks. Buck Owens died this weekend. You'll never see his like again, really. A giant, one of the last vestiges of classic country,and still performing up until his last hours. I don't feel like being obscure or trying to be clever today. I just feel like listening to some seminal Buck. Proper eulogies can be found at yr favorite country music sites. 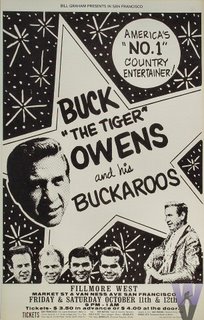 Buck Owens: Streets of Bakersfield (mp3)
Posted by Brian K Reese at 6:15 AM 9 comments: Links to this post 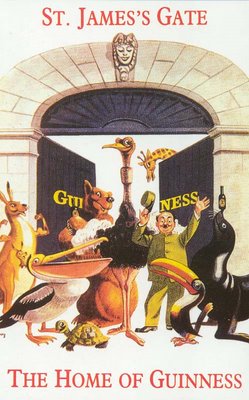 I know this is a day early. But the Mountain is very busy this week, and forget about getting anything out of me Friday.

This is hardly representative of all the great Irish music out there, from traditional to punk, and all points inbetween. I'm leaving too many great songs and artists out. But, I know all y'all got the Pogues, and that's a tad predictable from the Mountain anyway, innit? No need to remind me who and what I left out, I'm already working some Catholic guilt about it.

St. Patrick's not from Ireland. Shane lives in England. Mike Scott is from Scotland. But Phil Lynott was a genius, and Van's a mystic (or mystic fool). And Americans (that'd include me) act like the holiday was invented for them.

So enjoy a small drop in the bucket of tunes from folks from the Emerald Isle (or bands featuring folks from said territory). Have a pint, don't say "blarney" (you'll sound like an eejit), wear green only if you feel it validates you, kiss a redhead in Chicago (but watch out for his wife), and dance a jig like the drunken fools you are. Thanks for visiting. 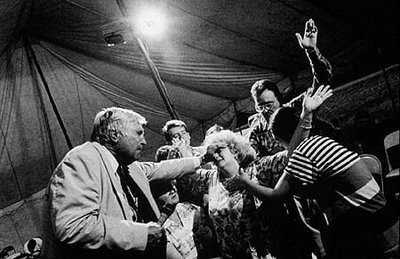 With the advent of the week leading up to my favorite holiday, I'm going to give one last go to a familiar theme. Well, not really a last go, but I really need to retire the theme for a bit.

One great thing about country music is the notion of never getting above one's raisin', as it were. No hoity toityness. I think I've inherited that notion from my Irish ancestors (whoever and wherever they may be) as well.

So, this is dedicated to the hypocritical religious right, and to the spineless left. And I promise I'm gonna put Bobby Bare to bed for a bit too.

Support your local, independent, house of worship and intoxication.
Posted by Brian K Reese at 6:06 AM 3 comments: Links to this post 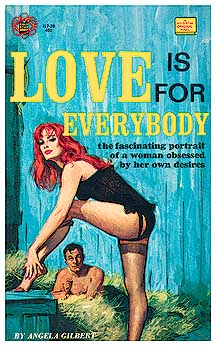 Truth of the matter is, I've been known, on occasion, to take a bit of a piss on Country music of the 1970's. And I'll maintain there's much from that decade that's better left buried. To tell the truth again, though, I'd have to admit to a good amount of Country from the 70's that was pretty damn swell. It's easy to lose sight of that until one stares into the shiny bauble of crap coming out of Nashville nowadays (and the whole last decade). Going through my record collection, I'm always astonished how many albums I own from the 70's or how many artists I admire made their careers during the aegis of the Rhinestone years.

Of particular interest is the perfection of the cheating song forged to an art during the decade of key parties, discos, swingers, niteclub culture, deep throats, miss jones, and leisure suits. Along with dead dogs, pickup trucks, and beer, country has always been about the cheating, two-timing, doublecrossing deeds of bad men and wayward women. God bless 'em. But there's something about a cheatin' song from the 70's that adds a weary sigh to the knowing wink. Which is not to say the genre became a study in moralism. Quite the opposite, as the act was generally celebrated as a hedonistic last dance before the dawn of the 80's, and the rise of a virus some called the consequence of sin. Or something. But, to toss off any over-analysis, cheating songs have always some of the funniest lyrics in country, doing the tongue-twist like Dr. Seuss.

I like Moe Bandy. A honky tonk purist in the midst of urban cowboy Nashville, Bandy somehow managed to position himself among Music City's elite despite a disinclination toward the slick and overproduced. His thoughts never far from the barroom and the bedroom (someone else's), Bandy racked up song after song about drinkin' and steppin' out, all without sacrificing his country raisin' (he was born in the same town as Jimmie Rodgers). The 80's and beyond were not kind to Bandy (depending on who you ask, I guess), and he now sets up shop in that little town I like to think is as Hell's representative on earth, Branson, MO. But it's his 70's output that should put a smile in every honky tonk's purist's heart.

I can't guarantee I won't do another Moe Bandy post featuring his fine, fine, drinkin' songs, but today it's all about the cheatin'.

Moe Bandy and Janie Fricke: It's a Cheating Situation (mp3)

Support your local, independent motels. The kind with hourly rates.
Posted by Brian K Reese at 6:39 AM 4 comments: Links to this post

Well It's Lonesome in This Big Town 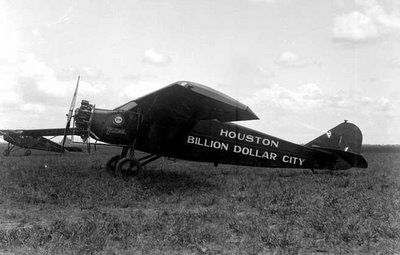 I've only been to Houston once, and that was for a layover, so I never left the airport. I was still afraid I was gonna get arrested for not carrying a gun.

Founded by brothers Augustus and John Allen, who paid $1.40 per acre for 6,642 acres of land near Buffalo Bayou in 1838, Houston is named after Sam Houston, general of Texas army that won independence from Mexico, and president of the Republic of Texas. Some also call it "Space City, USA" (probably not it's locals though). It's the 4th largest city in the United States, and home to the Houston Livestock Show and Rodeo, the world's biggest rodeo. It's also home to Comets and Astros, Aeros, Hotshots, Rockets, and Texans. NASA's got a thing going there. Cowboy hats and oil rigs figure prominently in the skyline. The Geto Boys were from Houston. Kenny Rogers, Barbara Mandrell, Howard Hughes, and Tommy Tune have all been born or resided in Houston. According to the 2003-4 U.S. census, folks from Houston eat out more than any other city in the United States.

We're informative here at the Mountain.

But we're not really concerned with Houston the city so much as Houston the idea. Houston the song. One we're quite keen on here at the Mountain. A stumbling, shambolic western hymn to, ostensibly, losing oneself and finding, again, in the green, green, grass of home. Or something. Maybe it's not about that at all.

Here's another Mountain favorite(hell, they're all favorites, aren't they?), presented in glorious technicolor. One by the man who wrote it, one by the man who perfected it, 'nother by a country prankster, and the final by a savant genius. Enjoy.

The Mountain is not planning on visiting Houston anytime soon, but if we do, we'd be inclined to check out their local, independent establishments. To get a proper taste of the character of the city.
Posted by Brian K Reese at 6:43 AM 6 comments: Links to this post