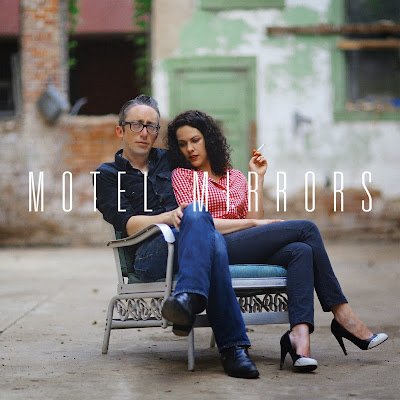 Got a couple of folks we wanna cover before things get completely insane, so we've got a special Thanksgiving post for ya today and a couple of other posts going forward that we'll mix in with the Holiday madness.

It's no secret our great love of John Paul Keith.  And he's got a new rekkid out, Memphis Circa 3AM,  that we'll be talking about a little later, and, yeah, it's fucking great.  But you knew that, right?

But, for now, we wanna focus on another record Mr. Keith put out this year.  It's called Motel Mirrors, and it features duets with the amazing Ms. Amy LaVere.

Some posit that the proper "duet" record is dead, with too many one-song, 10-line "collaborations" and not enough meat.  Motel Mirrors is the perfect prescription for that kind of thinking.

The record is too short, only 7 songs, it's an EP.  That would be our only criticism.  We wanted more.  Much more.  But perhaps that's a good thing.  Always leave your audience hungry.  And hungry we are.  It's a stunner, perfect in it's brevity and astonishing in scope.

Amy LaVere has a voice that will break your heart, partly because she demands you love her, shy and demure one moment.  And partly because she aint takin' no shit from ya, cool and detached when demanded.  It's a great weapon, sultry and detached, warm and inviting, sometimes all in one line.  And it plays perfectly to John Paul Keith's classic vocal style, a southern twang and Holly hiccup.   We haven't heard such a perfect pairing since George and Tammy, Prine and DeMent, Dolly and Porter.  Their voices entangle into a classic combo of kiss-off and love.

Every track on this EP is perfect, and we can't pick a favorite.  It kicks off with a rager, "Meet Me on the Corner",  a distilled boom chicka tale reminiscent of"Dark End of the Street", but with much more sass (on both parts), taking the meme into a realm that invites both sides, rather than machismo.  "Your Tender Loving Care" continues the theme, with Keith and LeVere trading barbs like guilty lovers clinging.

"Dearest" continues, with lovely pedal steel, island groove, a longing reminiscent of "Love is Strange", yearning and beautiful.  That may be our favorite track...until..."Suddenly You" kicks in, and we believe in Romeo and Juliet, without the weird suicide thing,  Jangly honky-tonk geetar framing the pop of circumstance.

"As Far As I'm Concerned", "The Best Mistake I'd Ever Make Again", and "That Makes Two of Us" round out the rekkid with perfect banter, and vocal play, each poking the expected, yet framed in Country tropes.  Almost subversive, but so perfectly framed by fiddle and pedal, and deep mountain arrangement that we revel in the 1950's innocence and awakening, swelled into the expected and fueled by the modern.

A modern re-telling, then, and Ms. LeVere and Mr. Keith throw down the gauntlet to our expected and take it to another level.  It's the best "duet" record you're gonna hear, going back 30 years.

Easily one of our best rekkids of the year.

Amy LaVere has a new record coming out shortly.  We're eagerly waiting for it.