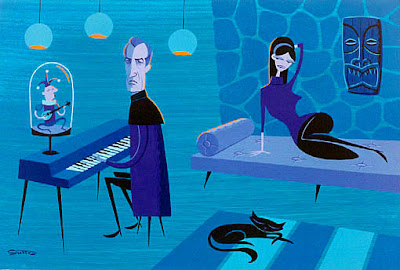 Gonna groove yr argyle socks off in a minute.

Bur first, we'd like to to draw your attention to a new festival coming up this Spring/Summer (May 28t-30, to be exact).  It's called The Muddy Roots Music Festival, and if you missed the bus on the Deep Blues Fest, then here's your chance to make amends.  Featuring, so far, such artists as Billy Joe Shaver, Wayne Hancock, Dexter Romweber, Reverend Deadeye, and the Ten Foot Polecats (amongst many, many others), this'll be sure to scratch yr Country/Punk/Blues itch all in one weekend.  And it's dirt cheap (currently $30, with camping free...so thirty bucks total, consarnit!  Beer (and...whatever you're smokin')'s  up to you, but you really can't beat that deal).  We'll be there, and who doesn't want to party and listen to great tunes with us?  We'll have more about this coming up.  Again, it's The Muddy Roots Music Festival.  Just check the link and tell us you don't wanna go.

Convenient then, that The Muddy Roots Music Festival is taking place in Tennessee.  'Cuz Tennessee is home to Memphis, and Memphis is home to so many great bands, including today's cover stars, The City Champs.

We got a chance to see The City Champs a couple of weeks ago, opening for The North Mississippi Allstars (how's that for a vote of confidence?), and they spun us on our ass-over-heads.

An organ trio (yep, we love the guldarned organ), The City Champs hearken back to a time of the house party and the song/performance as venue for the hottest sound un-pressed on wax, where the drinks were flowing and the dresses were hinting, the sweat was dripping and the devil was rising.  The drone and groove played host to the carnal whims of the whispered "yes",  or the twirled dance floor was a "maybe" to the heady push of need and lust.

Now the City Champs aint retro.  Sure, they pull from the tradition of Booker T. and the Bar-Keys, amongst others, but they've got their own kick goin'. Organist Al Gamble (from Muscle Shoals!) has played with Rufus Thomas, Syl Johnson, Alex Chilton, and the The Memphis Horns.  He brings a delightfully greasy element to the shake-a-boogie proceedings, while guitarist Joe Restivo and drummer George Sluppick kick out some slimy, slinky tones complementing the sleaze.

When I get that feeling, I get sexual healing, then.

'Cuz the band has sex appeal, dontcha know.  Cover your eyes, and imagine the go-go glory of yr favorite jukejoint, sweaty and all wound-up, ready for late-nite love, beer googles be damned, and the lady by yr side and the pulse of the rhythm rocks yr world and shakes yr shaker.  Booty and stomp, baby!


The best party record of the year, so far.  Whether you're night involves a sexy evening at home with yr lady or fella and a shaker full of martinis, or a night on the town, cutting the rug and gettin' down(!), goddammit, the City Champs are your soundtrack.  So sayeth the Mountain!

The City Champs: The Whap-A-Dang (mp3)

Yup, here's the part were we ask you to support your local, independent record store of choice, or at least get yr funk on at a place not called "apple beeeeees".
Posted by Brian K Reese at 8:30 AM 3 comments: Links to this post 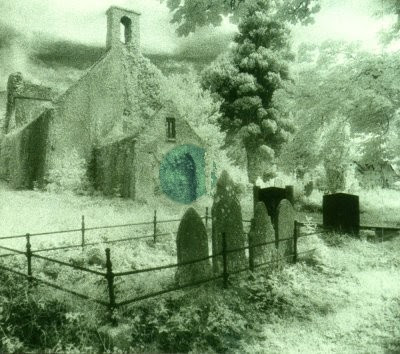 I'm sorry, but we're still trying to get over how awful The Who were the other night.  But, damn, good for The Saints!

Now then, and then.

Most of y'all visitin' this little corner are probably already familiar with the Tarbox Ramblers.  If not, go get yrself familiar right now.  It's ok, we'll wait, and you deserve it.

Leader/Guitarist Michael Tarbox has a solo record out, My Primitive Joy, and it's a damn good 'un.

Eschewing much of the sonic Country'n'Blues dirt and drawl of the 'Ramblers albums, Tarbox creates a rumination in a minor key, dancing around the changing of seasons and images pulled from nature and natural in its instrumentaion, mostly acoustic with pedal steel and violin touches, light and yearning.  The record moves from hope to despair, love to loss, earthly freedom, heavenly release, and dark obsession.  The edge of town not so much dark but dimming, and the end of the street a secret exposed.

Tarbox's voice, where formerly a raging and sand-worn throttle shifted, plays here at muted atmosphere, an end of the road bourbon and bitters, sometime reminiscent of Peter Jefferies at his more introspective, still rough around the edges, but with an emphasis to the sublime.

Again to the instrumentation, Tarbox is backed by Scott McEwen (producer, string bass, drums, guitar and piano), Jimmy C. Clark (pedal steel, violin, trumpet), Robby Cosenza (drums), and JJ Murphy (drums).  Mostly acoustic, the band create a soundscape that matches perfectly the voice of Tarbox, and the mood of the record.  Most notably, Clark, whose pedal steel adorns such gems as "My Primitive Joy", our favorite track, with a sense of longing and travel, wide open spaces amongst the canyons of the soul.

Other tracks, such as "At Dusk", with it's funereal pace and melting violin, the all too brief "Let Me Know How To Find You"(with the immortal line "As radios fade and even dust must gleam"), and the pedal steel (again) shimmered "Whose Face?"  all combine in a theme of floated awayness, a lingering drift over a burnt-out campfire where the couples have departed, the embers fade and spark, and all that's left is the shovel and the stars.

For folks looking for a more raucous sound,  "Darkness Is A Rider" is a slight return to the Tarbox Ramblers' muddy bottom , a stomper played acoustic, but full of moral loathing and dread.  "Have You Been To The City"  actually goes electric, but pulls it's punches masterfully, reflecting the tone of the album, while transporting to concrete rather than the "natural", closing the record with a hint of what was and is to come:  "What called you on forever/Mystery unbound?/Were you there in the city/ Thinking you had been found?"

It's a startlingly intimate record, one that lingers in you head and bounces, softly, through your ears.  We can't recommend this album highly enough.  Click here for a link to buy.

But we are born bound in time,
Slaves to mystery
And so I wonder
If these hopes at last will abandon me

Michael Tarbox: Have You Been To The City (mp3)

As ever, please support your local, independent record stores and music-makers.
Posted by Brian K Reese at 8:30 AM 1 comment: Links to this post 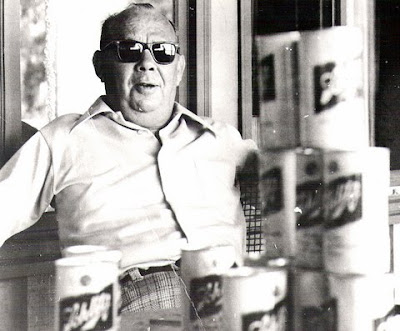 Ok, we're done pouting.  Thanks for your patience, and we've got another Six Pack of vinyl love for y'all today.

Next week we'll be back in the swing of things with a review of the fantastic new Michael Tarbox record, a piece on the City Champs (who we get to see opening for the North Mississippi Allstars this weekend), news about a new festival y'all should check out, plus some other goodies.

Now for the vinyl happiness!  Six random songs culled from our vinyl stash.  Every week we're buying more vinyl, and digitizing our old records, so god only knows what you're gonna get.

Today it's a whole plethora of yummy.  Sun Ra kicks off the festivities with an outer space groove, featuring vocals by noted interplanetary traveler, Yochanan.  Quintron follows up with an organ-drenched holler at the glory days of the roller skating rink.  No, really.  The Puffy Areolas kick things up a notch with a nasty little trash stomper.  After that little neck breaker, Don and Dewey give us a happy little R'n'B'er about, well, you know.  Bantam Rooster steps to the plate with a glorious two-man punk-blues junker.  And  Bahaman
Blues master, Joseph Spence takes us out with a little gospel glory.

Please support your local, independent...anything.  Fuck the man, maaaannnn!!!!
Posted by Brian K Reese at 8:30 AM 3 comments: Links to this post

The Dimming Of The Day 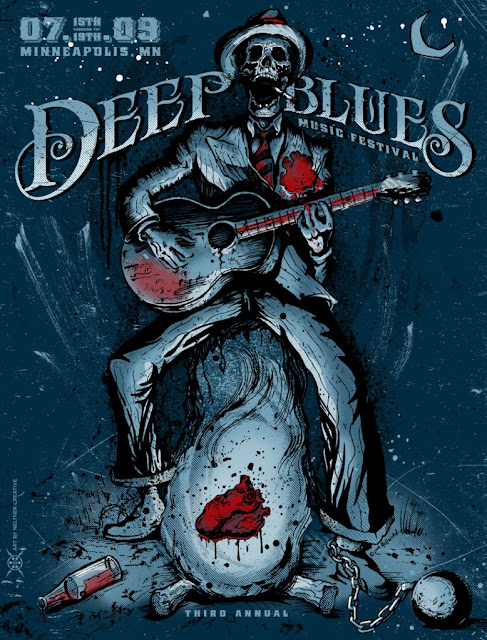 The Deep Blues Festival has ended.  There will be no more, at least in the form it's taken over the last several years.  I could rant for paragraphs on end about how disappointing this is, and what it says about our current state of musical blandness that this Festival couldn't continue.  But I won't.  Really.  In the background just now is the Grammy red carpet thing (I'm not watching by choice), and that Ryan Seacrest moron just said that this night is for celebrating the "best in music over the last twelve months."  He's wrong.  Events like the Deep Blues Festival celebrate the best in music, not the Grammys.

We want to thank Chris Johnson, the founder of the Deep Blues Festival,  for all the work and love he put into the festival.  We met so many great people at the Fest, from bands and solo artists, to fellow fans, to a regular reader at this here site.  It was an epiphianic slice of time, and not to be repeated.

We're gonna continue our series of Deep Blues Fridays.  And we're gonna do our best to expose all y'all to all the great bands and artists out there working under the aesthetic and artistic tent that the Deep Blues Festival represented.

Today, we're going radio silence.  No mp3's, no videos, nuthin'.  A day or two of silence.  In honor and in tribute. 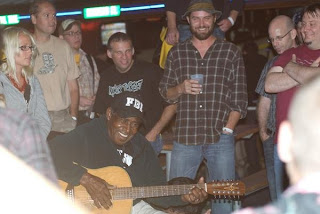 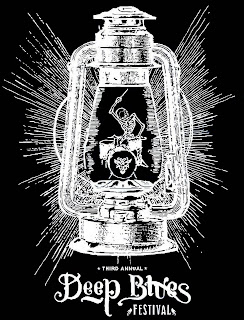 Posted by Brian K Reese at 8:30 AM 6 comments: Links to this post