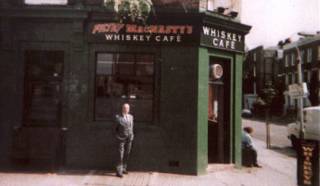 only a matter of time

Ok...I'm back, and with very very very exciting news. The new Tom Waits album, Real Gone, is due October 5th. I will be standing outside the record store approximately 1-2 hours before they open, in the vain hope that they'll let me in early. Course, they'll still be at home sleeping, but what the hell.

Now you may ask why I would go to a brick and mortar, local, independent record store as opposed to certain, unnamed, mammoth, online bookstores/record store? Easy. As our culture gets more and more co-opted and homogenized, it's nice to know that there are still places out there that actually care about the hands-on aspect of music, books, clothes, etc. Plus, independent stores have a different feel/smell/sound. They also tend to support aspects of the First Amendment, that chains can't be bothered with. This is the shortened version of a longer screed I 'spect I'll be posting at some future point. Until then I'll leave you with the caveat that I used to work for a very large independent book store in Denver. I would suggest going here for a guide to your local independent book store. Will you pay a little more? Yes. Will you be supporting choice and local businesses as opposed to the nameless, faceless corporations? Absolutely. Of course, it's your choice.
Posted by Brian K Reese at 5:26 PM 1 comment: Links to this post 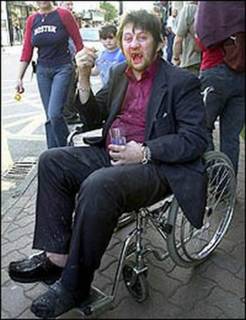 Today I'm feeling the love for Shane. A brilliant mind. I was at a Shane and the Popes show in Denver years ago, on my birthday, no less. The opening band was terrible (a local group of over-emotional goths called "Worm Trouble". Avoid). The band was obscenely late coming on, allowing the crowd of excitable Irish boys (myself included) to get drunker and drunker. When the band finally took the stage, Shane could barely walk, and the front of his black shirt was covered in puke. He even had to have someone come out and light cigarettes for him. While the band whirled about him, Shane stood stock still, gripping the mic as if his life depended on it. It might have. But the one thing that struck me most was, amid flying beer cups and screams of "Shane", whenever someone presented a cd or album to him for an autograph, while the show was going on, he never once refused to bend over and sign it. I don't know how he did it, or why. It seemed as if, no matter how bad off he was, he could find the strength for his fans. A sad and beautiful moment.

Much has been written about the Pogues and Shane Macgowan over the years. Apparently Shane might be in more trouble than we thought. His family is passing around a petition via the web to convince him that a) we love him, and b) he needs to dump Joey Cashman, his de facto manager. go here for the petition. Help one of the greatest writers of our generation.

Coming soon...music. I promise.
Posted by Brian K Reese at 9:47 AM No comments: Links to this post 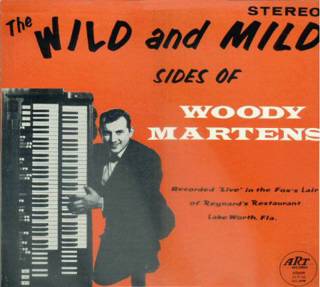 Posted by Brian K Reese at 8:50 PM No comments: Links to this post