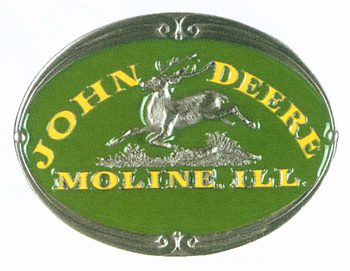 But first, I got "Meme"'d by Spread the Good Word last Friday. Ouch. Anyway, it's a music-related meme. So here's my responses.

Total volume of music files on my computer.
Way more than I can possibly listen to.

Song playing right now.
"Stick it or Lick it" by Nathaniel Mayer

Five songs I listen to a lot, or that mean a lot to me:
1. Rex's Blues (Townes Van Zandt (and a host of other worthy covers))
2. Little Ole Wine Drinker Me (Dean Martin)
3. Mama Tried (Merle Haggard)
4. Girl on the Billboard (Dave Dudley)
5. Harlan County (Jim Ford)
(As with the good Rev's response...this list could change minute by minute)

Phew. Ok, I'm going to pass this Meme along to...Countrygrrl at Blueskies.

More fathers and their issues today.

Waylon Jennings. There's nothing "alt" about Waylon Jennings. He's country, pure Texas country. It's odd now to think that musicians playing what sounds eerily like traditional country are now referred to as alternative. No matter. Most folks are at least passing familiar with Waylon as the narrator and theme singer of a little show called Dukes of Hazzard. I'm gonna guess that regular readers here probably know a bit more than that of Jennings.
The thing about Waylon was the thing that made him kindred with the likes of Johnny Cash, Willie Nelson, and Kris Kristofferson. Merle, too, come to think of it. Jennings never strayed from his roots, and he sure as hell didn't like the direction Nashville was taking away from the country he grew up on, and the country he wanted to make. He was never shy about a big middle finger to The Man. Waylon was hard, no doubt about it. Hard country, hard living, hard drinking, hard singing. And he left a hell of legacy behind him, one many of the "fuck you" altcountry types emulate to this day. But for the grace of a donated plane seat (see: Holly, Buddy and Bopper, Big), we would've missed out.

Continuing the theme started by Bobby Bare Jr. last week, Waylon's got a bug to pick with Nashville.

Waylon Jennings: Are You Sure Hank Done it This Way (mp3)

Then, of course, Waylon went and procreated. As these things happen, one of 'em decided he wanted to be a singer too. So Shooter Jennings picked up a geetar and a mic and started playing, horrors, hard rock, even playing with Guns 'n' Roses. Lucky for us, Shooter found his way back home and made hisself a country record. Mixing AllmanSkynrd with George Jones (who "guests" on a song), he's got his Daddy's penchant for regular folks doing regular fucked up things. He's also got his Pop's sense of pride in growing up Country. He named his debut album "Put the O Back in Country", which has some blatant similarities to a certain tune by another famous offspring, Hank III.

It's hard to tell what "real" means in this age of fabricated pop/rock/alt/indie stars. But I 'spect Shooter's about as real as we can hope for, paying homage to his Pappy and his raisin' with every note he plays.

Take your Father to the local pub, play some pool with him. Get him drunk, and make him buy you stacks of your favorite country albums from the record shop next door.
Posted by Brian K Reese at 5:57 AM 1 comment:

I'm Not From Here 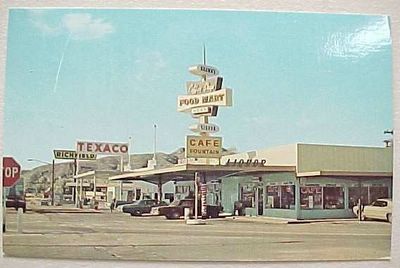 First Fringe Rock guest post today. I'll let John introduce himself below. Just a quick maintenance note from me. The poll below (a few entries down) is still active, and numbers 1-3 seem pretty well set. But there's a 7-way tie for numbers 4 and 5. Yoiks. So if you haven't voted, do so. If you already have...well, shit, vote again. This is Chicago, we even encourage dead folks to have their say.

Now, without further ado, take it away, John:

I'm John (from Milw) and Mr. Big Rock has granted me the honor and privilege to enter his bar room and do a guest post. I am a 41 year old musically obsessed guy who lives in a suburb of Milwaukee. As a true Wisconsinite, I love the Packers, Beer (yes the stereotype is true, though I can take or leave cheese) and Dave Dudley.
My most recent music purchases were the new Shooter Jennings and Van
Morrison CD's.

Following in the footsteps of a famous father can be a tall and daunting task. Not only are you dealing with the real or perceived expectations of the father, but you have the added bonus of dealing with the fandom's expectation. A no win situation.

I believe my nominee for the fringe HOF, James McMurtry has lived up to and surpassed all expectations. For the uninitiated, James McMurtry's father is Larry McMurtry, author of the Pulitzer Prize winning Lonesome Dove. Since releasing his first album in 1989, James has become one of America's great singer/songwriters. His songs tell the stories of everyman. He touches on life's pleasures and pains. As evidenced by his live album (Live In August Three), he is not some pretentious snooze-fest coffee house performer; his songs have a raw energy that will kick your ass.

Below are a couple of songs for your listening pleasure. Also, as an added bonus visit his web-site for a download off of his upcoming album.
Feed the family, pay the bills and if there is anything left, go out and buy a James McMurtry album. You will not be disappointed. 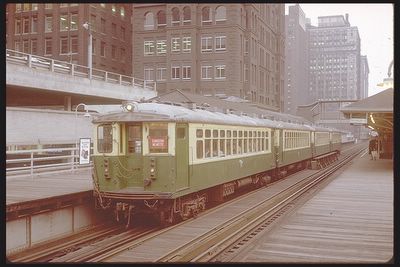 But, today, a little number in honor of Chicago, and my new apartment.

She Who Is Most Beloved and I have yet to install the blinds in our big bay window. What this means, of course, is that the whole damn world is in our business. Whoopee. Guess that's what happens when you move further in to, rather than out of, the big big city. Just glad we don't live next to an El line. Anybody got an electric screwdriver?

Chicago's Elevated trains are a national landmark. Perhaps even world famous. The Chicago Transit Authority has mismanaged itself in a deep budget hole, and now threatens to cut services and raise fares. As an avowed public transportation user and supporter, I'm among a large amount of extremely pissed off individuals.

What the hell do these things have to do with each other? Well, check out this little tune by old timey 'Opry stalwart Lew Childre.

Blah Blah Blah...shop locally. Take public transportation if you can.
Posted by Brian K Reese at 8:22 AM 1 comment:

Daddy Was a Pistol, I'm a Son of a Gun 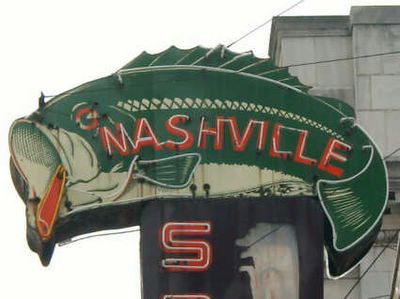 Father and Son week here at the Mountain, startin' today, and right quick before Blogger goes down for "maintenance." Again.

I usually leave the more modern altcountry/Americana stuff to those who do it a hell of a lot better than I can, particularly the god-like Songs Illinois. But I can't get a particular tune by Bobby Bare Jr. outta my head. It may well be one of my fave rave new songs I've heard in years.

But first, a little sumthin' bout and by his pappy, the singular Mr. Bobby Bare (Sr.).
Bare's certainly a candidate for the next round of fringe polling, as he's never really gotten the kind of recognition many of his peers have received. Mixing folk, pop, and traditional country with an often humorous wink that was never novelty, Bare set the type of outsider standard that would be visited by Jennings, Nelson, Kristofferson, et. al, all the way through to about half of Bloodshot's roster (you might note that apples really don't fall far from the proverbial tree). No stranger to one of the Mountain's top musical loves, Bare recorded numerous trucking songs. Following then, is Bare's answer to the classic Six Days On the Road. What happens when you're off the road for too long?

I've lost count of how many children of musicians have become musicians themselves. Some start off promising, only to become ridiculous (hello, Mr. Williams Jr.). Some are barely worth the procreation it took to make them(Wilson Phillips anyone?). And others take their parents legacy, pay it proper tribute, and make something wholly their own. That'd be my reaction to Bobby Bare, Jr. Certainly more modern than his Dad, with an obvious love of late-period Replacements.

We all know the sheer amount of shit that comes out of Nashville on a daily basis. But sometimes it's easy to forget how much greatness has emerged from said city, also. And Bobby Bare Jr. has a song that so perfectly captures the glorious, fucked up, and downright weird aspect of the beast we call "Music City." Easily my favorite song of last year, and this year too. Catchy, sad, and funny, the perfect epitaph and tour guide to the land of dreams.

By now yr well aware of The Mountain's stance on corporate media entities. So why are you still buying from conglomerates owned by fat old white men who don't really like music, and think Michael Bolton is great to listen to in their BMW's?
Posted by Brian K Reese at 10:43 AM 4 comments: 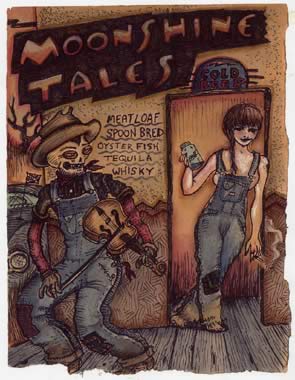 The long national nightmare is over, the computer is up and running and the broadband is flowin'. Sorry to have been away so long.

Hasil Adkins died whilst I was away. Others have given him a proper sendoff, but I would be remiss in not adding my own RIP.

New links to the left...check 'em out.

Then hop over to Keep the Coffee Coming and wish Kat a speedy recovery.

Did you vote in the poll below yet? If not, you've still got time. The final results (with mp3's) and next round of the Fringe Hall o' Fame will be posted at the end of the month. I've received a ton of suggestions for the next round, and the guest posts are beginning to pop up in my email box. If you've sent a suggestion and haven't heard back from me yet, fear not. I'm answering as fast as I can (course trying to answer emails from work got a bit tricky over the last two weeks). If you don't like the nominees in the first round, and don't submit yr own ideas, well, what are you bitchin' about?

Going up country today. Or, perhaps, down country. The Black Twig Pickers make a peculiar and joyously dark sound. From the furthest reaches of backwoods sepia Appalachia, and mixing the atmospherics of late period Red Red Meat through Califone, minus the undercurrent of electronic doodling, the Pickers fiddle and banjo their way through the history of rustic life. Apparently recorded on various front porches and parlours, it's a hoedown that strays never far from the most primitive of roots, familial and earthbound. Calling all campfires, yr bare feet are stained with the dirt of a hundred years.

The Mountain encourages strong family units and a sense of place. When purchasing yr 8 tracks and whatnot, make yr local independent retailer part of yr clan.
Posted by Brian K Reese at 6:37 AM 2 comments: