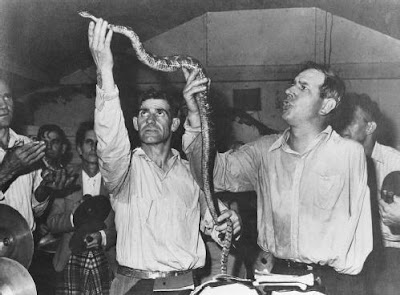 Hey, guess what? This is, according to my Blogger dashboard, my 300th post! Good gravy! And it's only taken me, what, 3-4 years to do it. It's quality not quantity, kids, yes indeedey. At least that's what I keep telling myself.

This summer I had the privilege of attending a long sweaty day of the annual Pitchfork Festival here in Chicago. Most of the day was filled with the type of bands you'd expect from Pitchfork, all style and no substance, disposable, with plenty of horned rimmed glasses, clever t-shirts, and old man clothes adorning the trend setters. But we were willing to risk sunburn and feelings of hipster inadequacy for three sets: Yoko Ono (oh yes!!!!), Cat Power, and today's cover stars Califone.

Naturally Califone was shuffled to the front end of the day, playing in the harshest sunshine and plagued by sound troubles from a techie who clearly couldn't handle 8-12 different musicians onstage at once playing everything from saws and accordions to trumpets and maracas. Califone is not a band that should be playing in the early afternoon damnation of a torpid summer day in the humid Midwest. Better would have been at the crack of dawn, with the sun slowly peaking up lazily through dew-dropped mist. Best, stick 'em in a desert canyon at twilight, the baked and scorched clay giving way to shadows where the snakes crawl at night, and trickster coyote has got a tale to tell.

The odd thing about my above insistence on where Califone should properly be heard live, is that they are very much a city band. A Chicago band. Born from the ashes of Red Red Meat, Califone was primarily the brainchild of Tim Rutili, an amalgam of found sounds, studio effects, blues mumbling, country shuffle, and cactus atmosphere, with lyrics fading in and out obscure and distant. Over the years, Rutili has added his cohorts from Red Red Meat to the lineup (Brian Deck, Tim Hurley, and Ben Massarella), and filtered in a plethora of like-minded musicians to create the sonic template that is current Califone.

So why should you, a regular visitor to the Mountain looking for a little trash, Country, Blues, or greasy R&B be interested in Califone? Well, first off, they're one of my favorite bands, and have I ever steered you wrong? And they're a Country band, really, the type of Country that could only be forged on the cracked urban pavement of the Midwest Gotham, bundled and bundling warmly through a flurried bone-chilling snow. It's like listening to a static transmission AM barn dance produced by aliens, steel guitar battling with analogue tapes 'n' filters, the saddest voice and the throbbingest rhythm.

"The Orchids" is actually a cover of a Psychic TV song, but Califone makes it uniquely theirs.

Califone: Michigan Girls (mp3)
Posted by Brian K Reese at 10:40 AM 3 comments: Links to this post 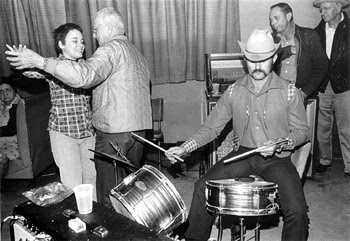 Where the gul-durned hell have I been?

Let's just say we've had a time of reflection, partially due to the cock-up from Blogger. Having lost my original site, links, and, well, just about everything, we debated on hanging the hat on the hook and calling it a day.

But, hell, nobody likes a whiner, so we figger it's about time to fire the site back up, break out the rhinestone shirts and Nudie suits, and hop back up on the rocking horse. Besides, who covers the gutbucket soul of Country better than the Mountain?

So thank you to the two or three folks who found us and stuck around while we got our shit back together. As a reward we've stolen a cue from the Good and Right Rev. Frost, and made all y'all a little mix. As a bonus, we're posting up another mix at our satellite site, Barstool Mountain, so hop on over there when the mood strikes. Regular posting will resume at both sites next week (no, really, it's true, i swear on the grave of Hank Williams).

One of the songs on the mix was originally a commercial for a prominent soda pop company. Can you guess which one?

Thanks again, and please enjoy (link to file follows the track listing).

As ever, please support your local, independent places of business.
Posted by Brian K Reese at 7:55 AM 12 comments: Links to this post