Sweetheart, You're a Cowgirl 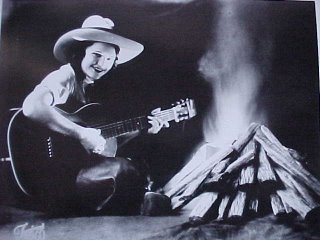 All y'all probably wonderin' where the hell all the country music went. Well, from now 'til Thanksgiving, I'm gonna give you all the pre-70's country you so desperately crave. Yup. And if you're marking your calendars, might as well remind you that come Thanksgiving and all the way through Christmas, the 'Mountain's going daily(daily!) with Holiday music. Goody. Just so's you know.

I'm astonished by the lack of information on the world wide internet thing pertaining to Patsy Montana. Sure, you get lots of hits when searching, but all the biographical entries are virtually identical, and rather gloss over just how important she was/is to country and western music. A footnote more than driving force.

Like Jimmy Rodgers, Montana's primary years occurred long before record sales were properly tracked. By all estimates, and taking into account the population of the time, Montana probably outsold and outdrew by a good margin many of the artists working today. 'Course this was before music tastes split into a million different pieces, where, now, we're only allowed to listen to one type of music.

What's most important about Montana, asides from the great music she made, is the far flung influence she fostered. You can trace that influence to Rose Maddox, on to Wanda Jackson, through Dolly Parton, and living still in every woman working in country-influenced genres. Neko Case fans take note. She was the first woman in country to chart a million-selling album, she played in a "boy's" game, where woman were supposed to be backup singers, eye candy for the cowboys. She composed a good amount of her own songs, long before it was made acceptable to have a mind of one's own in the western tradition. She also had one hell of a great big yodellin' voice, that surely made more than a few lonely cowpokes a little uncomfortable (nudge nudge wink wink).

Patsy Montana died on May 3rd, 1996, after more than 60 years of music-making and trailblazing. Later that year she was inducted into the Country Music Hall of Fame. Good job, guys. Glad you could, you know, get around to it.

Patsy Montana: I Want to Be a Cowboy's Sweetheart (mp3)

Excellent post!
These are some great songs.
"I turn so wild, the moon turns mild."
I would definitely want Patsy Montana on my side. She makes the "other" Patsy seem like a, well, a patsy.

Patsy also does a song called "The Yodeling Ghost" about a female ghost that incurs the wrath of the ladies in town. It seems she likes to flirt with all the men. The women band together at the end to teach the singing spirit a lesson. I actually found it on a blog somewhere out here in the ether.

i know you love the pogues so here is a link i came across with some mp3s that i hope you likehttp://www.shanemacgowan.de/ReUnion/hauptteil_reunion.html